OK, now we’re getting to the good stuff. Yes, that’s right – we all know I moved to Japan to start my own business (shameless plug alert: Tokyo Kawaii Club, opening soon!). But I’m sure you have some questions about why I did this. Like…

Blue! I love the color blue. Every type, too. Royal blue. Sky blue. Hell, even turquoise. Blue is the best. Anything else you want to know? What’s that? You have another question? Alright then – let’s hear it:

Why the hell did you move to Japan anyways?

Oh, wow! That’s another good one. You ask all the important questions. Did you major in question-asking or something? Because I can see why you asked it. While I’ve talked a lot about what led me to make a major life change, I haven’t exactly explained why I chose Japan. Well, I can tell you right now, it’s not for the obvious, cliche reasons:

So, uh… Then what? Another good question. You’re on a roll! There’s actually a ton of reasons why I chose to Japan. Here’s a few:

I can keep going (seriously!), but I think I’ll stop here. This isn’t to say that Japan is perfect (no country is). In fact, I’ll be writing a blog about the things I’m not looking forward to when I arrive. But when it came down to choosing a new place to restart my life, Japan was the obvious choice for me.

Choosing Japan may have been super simple, but figuring out what I was going to do once I arrived was a helluva lot harder. In fact, when I made up my mind about moving to Japan, I had zero clue what I was going to do. All I knew was I wanted to make the move. That’s it. OK, great – so now what?

Now, if you remember in my last blog, I decided I wanted move to Japan shortly after my trip to Hong Kong/Shanghai in December of 2016. As early as January of 2017, I started telling people (including my managers at Facebook) that I was thinking about making the leap. Keyword here: thinking. Because, at the time, I was only about 60% serious. I knew I really wanted to do it, but I wasn’t sure if, or better yet, how I could make it work.

One of the first things I thought about was working out of the Facebook Tokyo office. That’d (obviously) be the easiest way to do it. But after some investigation, it was pretty clear this wasn’t feasible. Crap. So then I started looking at job listings in Japan. Big surprise – they almost all required some level of understanding of the language. Ugh. That also wasn’t going to work. My last option was teaching English. Sure, I could have done that, but I felt like at 34, I wanted to pursue something I was more passionate about. Like… Um… Visiting theme parks? Yes, that’d be rad! But I knew I couldn’t get paid to do that. What a silly idea. Bad, Michael – bad!

Out of ideas (and totally lost), I emailed my former co-worker/friend Mark to ask for advice. Mark’s a super rad dude who quit his job in San Francisco and, like me, decided to move to Japan, where he’s been for almost a decade now. For the longest time, he worked with my other friend John (the same John from my previous blog post) at the video game localization company 8-4. But he’s since moved on to work with famous video game designer Tetsuya Mizuguchi at Enhance Games. Since Mark left America in a similar fashion to me, I figured he may be able to steer me in the right direction. Sure enough, he did steer me in the right direction. Only, not in a direction I ever thought I wanted to go.

In his reply to my initial email, he ended it with this PS:

PS — I’m just gonna leave this here (it’s about starting a business, but a LOT of it applies to someone in your shoes, I think!) http://behere.asia/making-it-in-japan/

The blog he linked to was written by a super cool woman named Elizabeth who is, no joke, almost like a female version of me: used to work for a major Bay Area tech company, quit her job, and moved to Japan. Only difference is at the time that I read her blog, she actually figured out what she wanted to do in Japan. And that was start her own business. Big surprise – that’s exactly what her blog is about – the step-by-step process she took to start a new life on her own in foreign country. It’s a great read, btw, – you should totally check it out. 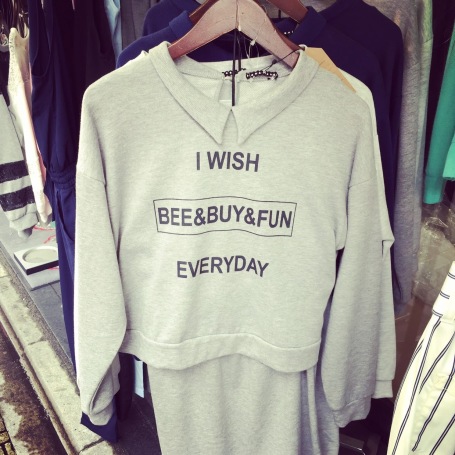 Like Mark said, a lot of what Elizabeth talked about did apply to me, even though at the time I had zero intention of starting my own business. In fact, I wrote this back to Mark after reading the blog that morning:

BTW: Thanks for the heads up about that link! I just read it, and like you said, even though I may not intend to start my own business (that’d be too SF cliche!), I still found it super relevant (and really inspiring!).

I wasn’t lying when I said it was really inspiring. It was so inspiring, in fact, I ended up reading it again right after emailing Mark. And then I read it again. By the 3rd reading, it really struck me – starting a business in Japan (while certainly a challenge) sounds – gasp – actually doable. Then I got to thinking: What if I start my own business? By doing so, it’d solve a lot of my problems. I’d be able to obtain a work visa (that way I won’t get kicked out of the country), I’d be able live wherever I wanted (hello, Tokyo!), and, most importantly, I’d be able to do what I want to do. Ahh!