Yep, I write blogs now. I also recap episodes of Game of Thrones, too. But I don’t think anyone knows and/or reads those, because I’ve received ZERO feedback about them. But I’m still gonna do it. Because I’m addicted to SILENCE. And ISOLATION. And LONELINESS. Wait, is today opposite day? Lemme check. Checking… Checking… Checking… Ah, crap – looks like it’s just LOOK ALIKE DAY.

Wait… Does that mean I really am addicted to all those things? NOOOOOOO! FML.

I was actually inspired to write this blog when I read that pro-wrestler John Cena broke up with his fiancé Nikki Bella mere WEEKS before their wedding. This, after he PROPOSED TO HER at WRESTLE-FRICKIN’-MANIA last year. Doh! 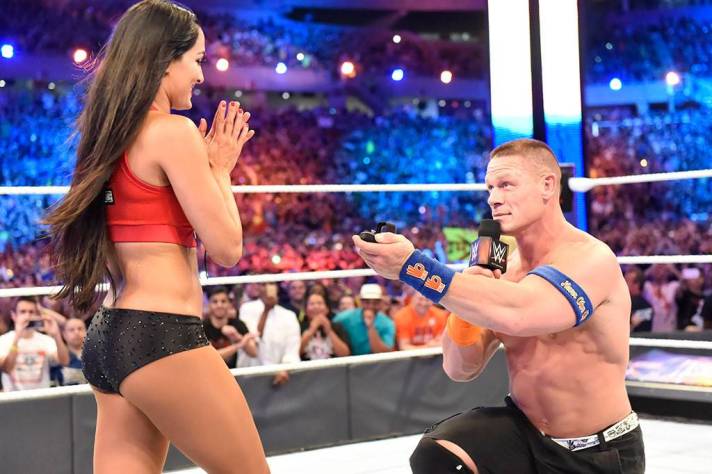 This resonated with me because I also take steroids and wrestle oily men in spandex. OK, that’s a lie – sorry. I only wrestle oily men in spandex; I promise I don’t take steroids. But Cena’s breakup was interesting to me because the speculated reason for their breakup has been pretty obvious for years now: Cena is a ROBOT who is programmed to WORK NONSTOP, unless he’s granting sick kids wishes and/or hosting Nickelodeon Kids Awards shows. Meaning, he ain’t got no time to have kids nor do any of that marriage stuff like LOVE another PERSON not named JOHN CENA. Unfortunate, but it seems like Cena is so laser-focused on his career that he doesn’t seem to care. And that made me think about my own situation and how it’s similar and how it’s different. So let’s look at both the SIMILARITIES and the DIFFERENCES between ME and JOHN CENA.

Oily men: We both like to wrap our arms around sweaty, oily men and SQUEEZE those beefcakes like a tube of toothpaste filled with delicious man-goo. Err… Wait. I think that’s just me. Haha! Sorry. Ahem… Next!

Professional drive: It’s well-known Cena is a WORKAHOLIC who has an INSANE schedule, yet still manages to look super human. I actually saw Cena live back in ’05 and I was legit shocked how ENORMOUS he was. So you gotta respect that. And it’s obvious his hard has paid off; he’s currently making the transition from the biggest pro-wrestling star of the past decade to becoming a legit Hollywood actor. That’s not easy. Unless your name is The Rock. Or Batista. OK, so other wrasslers have done it, too. But Cena is way more of a robot. Mostly because it seems like he has no personality OUTSIDE of work. Probably because he has NO TIME to like anything else BUT work. Hmm… Sounds familiar.

Y’see, I reconstructed my life in such a way that work is now my #1 priority. As such, I have practically NO TIME to do anything else but buy cute crap, pack it up, and send it to people. Which has caused me to isolate myself from the rest of the world. I have NO CLUE what’s going around me. I don’t know what’s popular anymore. I don’t talk to ANYONE outside of my best friend Duong. And when I do talk to her, I just make fun of her for hoarding shit and eating too many donuts/cookies (she ate FOUR cookies recently – WTF!). Work has consumed me in such a way that I forget what it’s like to have a life. For that reason, it’s super easy for me to see how the thought of getting married (let alone having kids) probably scared the BAJESUS out of him.

But the passion for work is what makes both of us succeed. Well, him, at least. I’m still barely scraping to get by. But I’m not dead yet! So that’s success. 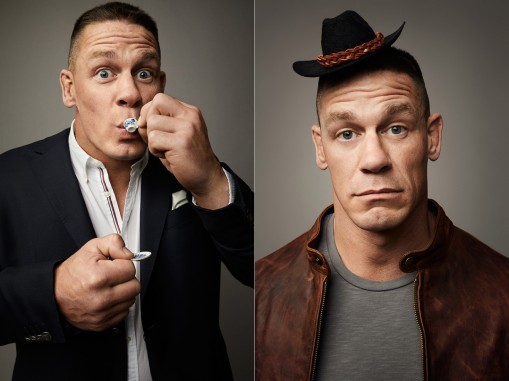 Crazy handsome: This one is obvious: All the women want us. Or him. Mostly him. Mostly? Only him. Sorry. I suck at this.

Marriage: Now this is where we’re both CRAZY different. From what it seems, Cena has NO DESIRE to get married again nor have kids. And he’s 100% cool with that. Me? I’m the COMPLETE OPPOSITE. Getting married and having kids (more the latter) is the ONLY THING I want in this world. More than corgis. More than carbs. More than a washing machine that doesn’t make an INSANE rattling noise during the spin dry cycle. More than… OK, wait… Can I replace that last one? I actually do kinda want a new washer. Hmm… Replace it with free time. No, wait – I want that, too. Fuck. Basically, it’s literally the only non-material thing I truly WANT in this stupid world. And it’s pretty scary to ponder a life where I never get it. Actually, let’s not think about that.

Success: Cena’s hard work has paid off for him. I say this, because I presume his bank account has more zeroes than I can count. Granted, I can’t go past 3 (ain’t nobody got time for that), but I’m sure it’s a lot! The dude has made MILLIONS from wrestling, merch, and movies. So while he’s crazy busy and doing a bunch of different shit, he’s also piling up a stockpile of riches big enough to dive head first into that shit Scrooge McDuck-style.

Me? All the hard work minus the massive money bin. Yeah, yeah – what I do is way different. And I don’t deserve (nor expect) to be making millions, but the balance of hard work vs. compensation between us is completely out of wack. And I’m cool with that. Honestly, my goal is to work hard enough where I can afford the luxury of having more free time to myself. Who knows if that’ll ever happen. Lol!

Muscles: I think he has bigger muscles than me. I can neither confirm nor deny this.

Takeaway: John Cena and I are basically twins. In a world where twins are nothing alike nor look the same. But we’re both hyper passionate about our jobs, to the point where we have no time for anyone else. For him, he seems to be cool with it. Me? Not so much. But that’s the price I pay to live my dream.